The Brexit debate came to town this week when my local and much loved hostelry @atthechapel Bruton hosted an illuminating debate on the subject. When I say illuminating, I’m not suggesting the participants shed any new light on those deeply muddy waters, but that it clarified something for yours truly. With polemic raging on both sides it’s simply a principle we are arguing, with evidence of what might happen if we exit pure speculation. The day after our local debate David Cameron announced that we’d be heading for our first ever “DIY Recession” if we vote to leave, which suggests to me that it was pure reckless bravado to call a referendum in the first place. With everyone from the Treasury to the Bank of England, the top 250 business leaders and a similar number of our cultural leaders, and further afield respected world leaders all agreeing that it’s incredibly damaging to the economy and our status to back out why is anyone asking voters? There’s certainly no evidence we’ll be any better off, so we will all, myself included, be voting with our hearts and not our minds, a dangerous scenario for the whole country. Call me old fashioned but there are some decisions that I actually do think it’s up to our elected representatives to make. With so much weight placed on remaining in the EU an impassioned and statesmanlike speech about our place at the heart of Europe, the sort of thing Churchill did so well, would have served far better and more responsibly to end the discussion. We are all at sea on this subject, with hard facts the most difficult thing to unearth in the grandstanding and tit for tat responses from both sides. The great thing about being Prime Minister is that you do get to call the shots and if David Cameron believes it an insanity to leave, (which I happen to agree with), shouldn’t he simply have stood his ground, silenced the Europhiles and set about saving the NHS and raising some more funds for our beleaguered schools. This is a defining moment in our history and amid all the discussion about whether we will be richer or poorer, less tangled in bureaucracy or not, one indisputable fact remains. The EU project was conceived in the aftermath of hundreds of years of bloody European history that concluded with two terrible World Wars. Seventy years of peaceful co-existence with our neighbours, where commerce and compromise have replaced butchery and battle, surely speaks louder then the frustrations of a bunch of power hungry politicians in a struggle for leadership of the Conservative Party and a similarly power crazed European Parliament that if we took more interest in individually (like making our choice of MEPS as much of a priority as MPs in a national election) would better deliver what we desire in our day to day lives. I’m not one for a paternalistic political culture (nor maternalistic for that matter) but once I’ve exercised my cherished right to vote I want the winning party to govern with wisdom, not throw potentially self-harming choices back at the people. That’s what you call ‘Wagging the Dog’.

It’s 40 years since the glory days of Punk, a youth revolution in it’s heyday when I first arrived in the UK as an impoverished sixteen-year-old migrant from Ireland. So the sight of the iconic Siouxsie Sioux, all black hair, crimson lips, and raging, as she lead her Banshees into the charts, 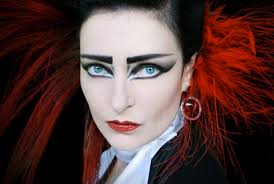 was a defining moment. Here was a woman utterly comfortable with who she was; loud, proud and taking no prisoners. Others may hold up the likes of Emily Pankhurst, Germaine Greer and Naomi Woolf as their feminist inspiration but for me it was Siouxsie Sioux whose sheer bravado took my breath away. I don’t imagine any of those lascivious DJ’s, who we now know abounded at the time, laid a hairy paw on her. She would have bitten it off!